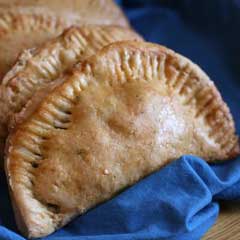 Submitted by: Charnia A. Parrish

Empanadas are a holiday tradition for some. Of course, they also make a wonderful addition to any brunch!

Combine the flour salt and sugar in a mixing bowl. Cut in the lard/ shortening and butter until the mixture resembles small peas. Add enough water to form a soft dough. Chill the dough wrapped in plastic or in a plastic bag, for approximately 30 minutes, while you combine the ingredients for the filling.

Roll the dough on a lightly floured surface to 1/8” thickness. Cut 5-inch circles. Place approximately 2 heaping tablespoons of filling on one half of the circle. Moisten the edge with water. Fold the dough over and press the edge together with a fork. Cut a small slit in top of the empanadas. You can brush the empanadas with some more water and sprinkle them with some cinnamon and sugar before baking.

Fried empanadas: Do not cut a slit in the dough; do not dust with cinnamon sugar before frying. Fry in hot oil (325-350°) until golden. Dust or dredge in cinnamon sugar mixture.