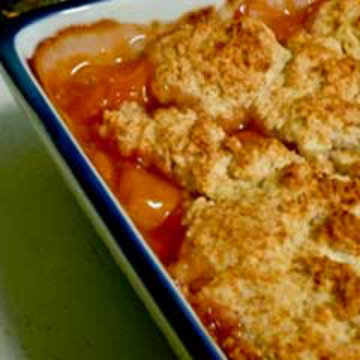 Submitted by: Charnia A. Parrish

After a big family dinner, nothing finishes off the evening better than warm homemade peach cobbler. Enjoy!

This peach cobbler calls for a conventional pastry topping and crust. Unlike a traditional peach pie it is baked in a 9” x 13” pan.

Roll 2/3 of the crust into a large rectangle. Place the crust in a 9”X13” pan. The edges should hang over by 2-3 inches. Combine the sliced peaches and lemon juice. Stir in the flour, sugar and cinnamon. You may want to add the lower level of sugar first; the peaches the Sichlers carry are usually very sweet. Use a slotted spoon to place the peach mixture in the unbaked crust. Pour enough of the liquid to come up ¾ way up the peaches (a little more is ok). Reserve the remaining liquid for a topping for peaches and waffles; just simmer it in a heavy saucepan until it thickens.

Place the crust in the preheated oven. Reduce the heat to 375° after 10 minutes. Bake the cobbler for an additional 40-50 minutes, until the crust is golden.